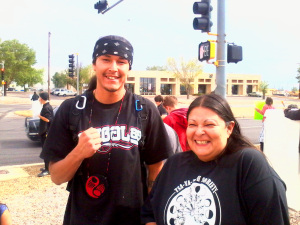 Anna Rondon and her son, Cooper Curley, attend a protest outside the U.S. Forest Service office in Albuquerque in May. — Photo by Robin Brown

— The uranium mine on Mt. Taylor has been quiet since 1984. Two companies are proposing to change that: Strathmore from Canada and Sumitomo from Japan are looking for permits to develop what’s been called the nation’s largest uranium mine.

The Forest Service extended its deadline for public comments on the proposed Roca Honda mine until Thursday, June 13 (info below). While many have said the mine will bring in jobs and tax money for the state, others have warned that contamination near abandoned mines has caused long-term environmental and human health problems.

Uranium mining was prevalent on Navajo land from the late ’40s through the ’80s. Anna Rondon is Navajo and has been a social and environmental activist for almost 30 years. She says energy harnessed from uranium is not worth the negative health impacts it has on people and the environment. “It’s the same old story since Custer invaded South Dakota for gold. They’re still invading our lands for a different yellow dust. It’s making our people sick. Indigenous people and poor people have to bear the brunt of the impacts of bad water, contaminated air and birth defects.”

Navajo neuropathy, which causes liver dysfunction and nerve degeneration, is one of the birth defects associated with uranium. “The digits in their hands and their feet start curling up,” Rondon says. “It’s a neurological disease, and they don’t live past 30 years old.” Other health effects associated uranium mining include lung cancer and kidney disease.

Cleanup takes decades, and there are still many sites that have not been properly decontaminated. There was a disastrous spill at the mine in Church Rock, N.M., in 1979. The spill is known as the largest release of radioactive wastes in U.S. history, second in the world only to Chernobyl. Basic measures were taken to clean up the mine when it was closed in 1982: Buildings and equipment were cleared, waste piles contoured, mine shafts capped with concrete, and fences were installed around the area. The EPA, at the request of the Navajo Nation, began investigating the site in 2006 and found unsafe levels of radium contamination.

There are more than 500 abandoned uranium mines on the Navajo Nation. “They take longer to clean up than they do to operate,” says Paul Robinson, research director of the Southwest Research and Information Center. He has been studying uranium mining since he started working at the center in 1976. “The companies disappear, get swallowed up, and the individuals move on. The people who live near the mines are the ones that face the risk.”

Strathmore Vice-President John Dejoia told the Albuquerque Journal that companies know more about uranium mining now and how to make the process safer. A draft environmental impact statement—a document put out by the U.S. Forest Service to assess the possible benefits and drawbacks of the mine—says it could create around 2,400 jobs and $81 million in local and state revenue over the life of the mine.

According to the World Nuclear Association, an international organization that promotes nuclear energy, uranium is an efficient and cost-effective source of energy: “Its availability to supply world energy needs is great both geologically and because of the technology for its use.” The association argues uranium is a potential radioactive hazard in powder form, but in its natural form the radioactivity of uranium ore is minor, comparable to that of granite. “In many respects, uranium mining is much the same as any other mining,” the group’s website states.

The uranium market is in a slump after the Fukushima disaster, according to the Wall Street Journal, but pre-Fukushima demand for uranium may return in a few years, making it attractive to investors.

Paul Robinson with the Southwest Research and Information Center says the price decline of uranium in the ’70s and ’80s forced the closure of mines in New Mexico. The expense of mining and hauling a lower grade ore—such as what is found in Mt. Taylor—300 miles to Energy Fuels mill in Utah is still a commercially difficult venture, he says. 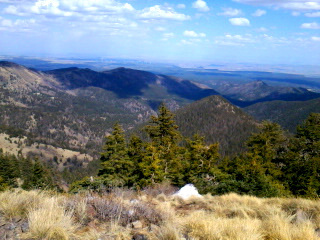 The view from atop Mt. Taylor — Photo by Robin Brown

“They have the deposits. It’s got potential value. But it’s expensive to build the mine and operate the mine before you generate any income,” Robinson says. “There’s been no economic showing that they can haul the ore there and bring the trucks back empty, and do that in a profitable way.”

Energy Fuels has signed a letter of intent to buy Strathmore Minerals, so the company may gain a stronghold on uranium mining and milling in the West if and when demand for the ore increases. The value of uranium is predicted by analysts to rise in coming years.

The United States has a program of taking uranium from weapons stockpiles for use as nuclear energy. Robinson says demand for newly mined uranium in the U.S. is low given the country’s already large nuclear stockpile and difficulty financing reactors and mills. Harnessing wind power would be a more practical option for the state, he says. “The economically viable energy sources on Mt. Taylor are renewable energy sources.”

The Layer Cake of Laws and Values

There are at least three different sets of laws in regards to the rights of mining companies in New Mexico: federal law, state law and tribal law.

The federal General Mining Act of 1872 gives anyone the right to mine as long as they are in accordance with other laws. “It’s federal law that we require access to the minerals, so we really can’t say no,” says the Forest Service’s Tafoya. The role of the agency is to set guidelines for the proposed mine. “We have to make sure that they take all precautions to protect resources while they’re going in with the project,” she says.

State laws are more stringent, elaborate and enforced than the federal law, says Robinson. To reopen the Roca Honda mine, the companies must obtain water rights, a mining permit from the state under the New Mexico Mining Act, and another permit under the Water Quality Act, he says. Groundwater must be removed from the underground mine and treated for radiation before being returned to the drinking water supply, according to the environmental impact statement.

The Diné Natural Resources Protection Act of 2005 declares a ban on uranium mining, claiming damage to the culture, society and economy of the Navajo Nation. “Stories that have been passed down from generation to generation warn that certain substances of the earth harmful to the people should not be disturbed,” states the law.

In contrast, opportunistic investors at Strathmore and Sumitomo see an untapped supply of uranium and a market on the rise. “There is a very sharp difference in values between the companies and the tribes,” says Robinson.

For Zuni, Acoma, Navajo and Hopi tribes, Mt. Taylor is sacred. Rondon attended a protest against the Roca Honda mine outside the Forest Service office in May. “I have grandchildren and I want them to have access to that sacred mountain. My great-great grandparents did. We want to pass it on to the next seven generations,” she said. “We’re here to show support to the United States Forest Service to do their job and protect the innocent, the voiceless, that live on that mountain.”

Comments on the environmental impact statement can be emailed to: [email protected]