Trending
You are at:Home»Environment»This Is Not a Drought
By nmcompass on June 14, 2013 Environment, Opinion 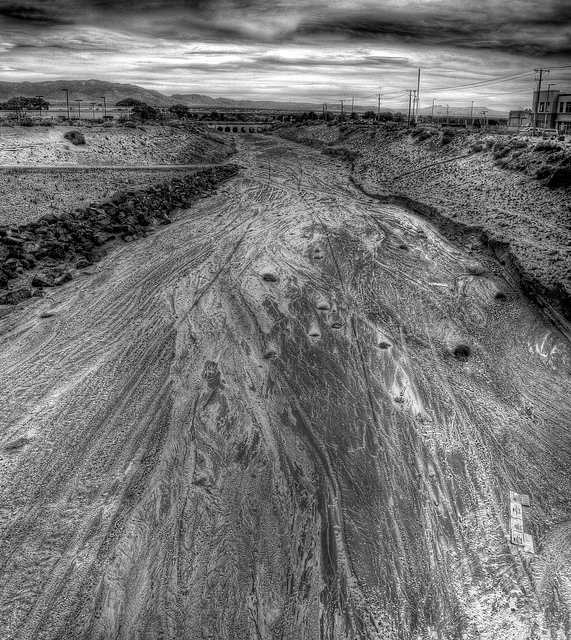 — The interim legislative Water and Natural Resources Committee met in Santa Fe and heard updates on New Mexico’s water situation so sobering that the usual back-slapping and good-natured ribbing with which most such gatherings conclude were noticeably muted.

The litany of symptoms of our current plight wasn’t what left most participants shaken last week. Rather, it was a reminder from the leader of a newly formed drought subcommittee that a growing number of scientists suggest New Mexico’s lack of rain does not necessarily mean we are in a drought—a temporary moisture shortfall that eventually corrects itself.

Researchers point to evidence from the past thousand years that absence of rainfall is the norm. The past 50 years were the true aberration. In short, we may not see more rain for a very long time.

Since we’ve only been receiving 6 to 10 inches annually during this abnormally wet recent era, we should take steps immediately to deal with the implications of a prolonged period of 1 to 3 inches of rainfall per year.

All our water policy and planning is premised on that 6 to 10 inches figure. It forms the basis of multiple compact obligations to neighboring states, agreements with the federal government and promises to in-state industry, tribal governments, urban communities, farmers and ranchers. If that level of rain doesn’t materialize, our margin of error is slim; we suffer serious cutbacks. And if we don’t get moisture for two or more years in succession (like now), we deplete reserves and rapidly face catastrophe.

There are many signs of the disaster our current policy plus two years of lower rainfall have produced in 2013:

Ranchers throughout the state have on average reduced the size of their herds by two-thirds, and many have sold off all their animals under duress.

Farmers who have been promised three acre feet of irrigation water will have to get by this year with three inches. This means many crops will fail, and others will have lower yield.

There will be little to no pecan crop this year in the Mesilla Valley. The lack of irrigation water has forced orchardists to prune their trees back to the main trunk in an effort to save them.

Four lakes in this state have severely limited access. (The water level is so far below the boat ramps that they pose a genuine public safety hazard if anyone attempts a launch.) Elephant Butte, our iconic recreational reservoir, faces water levels lower than the year the dam was built over a century ago.

Farmers in the Carlsbad Irrigation District are locked in conflict with other farmers upstream—not because of river flow overuse (there is no river flow), but because pumping wells north of the district has lowered the aquifer and drastically affected availability of water for Carlsbad irrigators.

A similar issue has prompted a formal lawsuit against our state by Texas. It contends farmers in the Mesilla Valley, who turned to well water as compensation for the lack of ditch water, are negatively impacting El Paso-area agriculture. If we lose that court case, the State of New Mexico could be compelled to pay damages as high as a billion dollars.

Tinder-dry conditions in our mountains and forests have closed most of them to visitors. The air is heavy with smoke and ash from numerous blazes already destroying hundreds of thousands of acres of vegetation.

Albuquerque has seen 20 percent of its urban trees, its life-giving canopy, lost to lack of rainfall and restrictions on water use required over the last two years.

And wildlife, desperate for food and water, will increasingly be forced to confront people in our foothill and suburban developments—with a resultant loss of life and limb for animals and occasionally people.

All this is the product of two years of reduced rainfall. What if experts are correct and it’s decades before we achieve the 6- to 10-inch levels again? How do we adjust to that frightening reality? How will Albuquerque, which is dependent on San Juan-Chama water rights purchased years ago, deal with a scenario in which the San Juan River Basin runs dry?

Photos of bone-dry Heron Lake and El Vado Reservoir circulated at the committee meeting were not comforting, to say the least. Water rights are only enforceable if there is water to own. A couple more years of thin Colorado snowpack like the last two will make our city’s vaunted rights theoretical at best.

It’s clear that if we’re to avoid the fate of earlier civilizations in this area that disappeared when rivers and springs dried up, we have to change our thinking and our policies. We need revamped agriculture. Is New Mexico really an ideal place for cotton cultivation or dairies—both among our biggest agricultural crops, but both water-intensive? Perhaps if we receive 6 to10 inches of rain a year. But what if we live in a new era of 1 to 3 inches?

We need to ask other hard questions. Is it wise to rely on unproven technology to bail us out? Does desalinization of brackish water from deep aquifers offer anything more than a temporary fix? Can we build a pipeline from the Mississippi Valley to move millions of acre feet uphill—and does that make economic, environmental or social sense? Would systems for water recycling and reuse change the situation enough to justify the capital investments required? Is cloud seeding anything more than a pipe dream?

Perhaps most crucially, can a New Mexico with 1 to 3 inches of annual rainfall for the foreseeable future sustain even its current population—let alone a growing one?

Water, our most precious natural resource, must be kept high on the agenda of our state policy-makers. Further, we ought to demand answers from the candidates in next year’s state elections. Anyone who aspires to be governor for the next four years will face no bigger challenge New Mexico’s water policy problems. Those alone may be the key to making a choice among the candidates.

We haven’t seen leadership on this front from Gov. Susana Martinez so far. Has she finally decided on a direction she wants to take us? Do any of her challengers have more than platitudes to offer? If we don’t demand answers—if we are too unrealistic or too politically paralyzed to act decisively—the inexorable processes of nature will continue, and we will simply resign ourselves to becoming their victims.

The Anasazi left us important advice: Pray for rain, of course. But as a people, act as if the answer to those prayers won’t arrive for a hundred years.