I sit with my son on my lap overlooking a dusty depression, a swath of brown erosion bordered by thorny Russian olives and dense saltcedars. “What is this place?” my son asks me.

“We used to call this place the Bosque,” I reply. “I brought you here to help you imagine what this used to look like, and why we try so hard to protect the patches of wild nature that still remain. 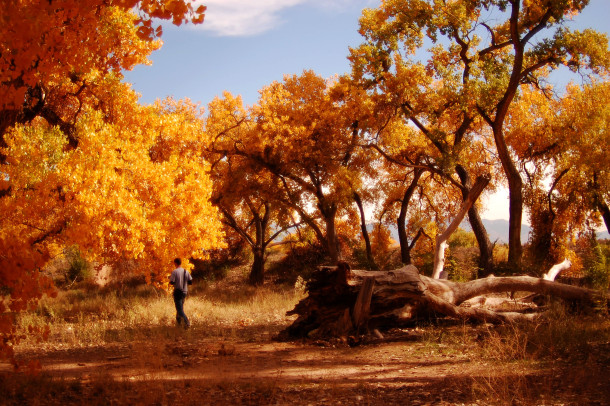 “Before you were born, your mother and I would take walks here alongside the Rio Grande in the shade of the cottonwood trees. We would park just off of Tingley Drive or by the BioPark and wander into the woods. There were many small trails, and we were familiar with all of them.

“There were no cars here, no sirens, no machinery, no boardwalks, no asphalt. We could take off our shoes and cool our feet in the water on hot summer days and feel like we were in the middle of a wilderness—even with the road just a few hundred feet away. The parking lots didn’t intrude into the Bosque, and there were no paved paths, trash cans or restrooms alongside the river. This all used to be trees, and the trees were filled with wildlife.” I waved my arm behind us.

“There were hundreds of different water birds and other animals that sheltered here: migrating geese and ducks and cormorants and herons and egrets, not to mention beavers and porcupines, muskrats and fish.”

“What happened?” my son asks.

“A mayor called Berry thought that the Bosque was not being used enough, so he hired a team of advisers to come up with what they called ‘improvements.’ The team decided that by building parking lots and bridges, boat launches and restaurants, people would come and spend money here.

“The mayor believed people wanted convenience and entertainment from the Bosque, not wildness or to feel the natural world around them. He seemed to think that people were afraid of touching the earth with their bare feet.”

“On one hand it did. More people came in their cars to buy things, but it lasted only a short while.

“The very year the mayor proposed his plan, the city fire department restricted access to the river because of the threat of fire. In the same year, the entire region was in a historic drought. There was little snowpack, and we hadn’t had our regular monsoons.

“Despite that, the mayor forced his development onto the Bosque, bringing huge earth-movers and dump trucks that ran for months, laying down tons of concrete and destroying habitat. A spark from one of the vehicles caused a fire that ravaged the area. The only trees that survived are those that can withstand fire, like these saltcedars. 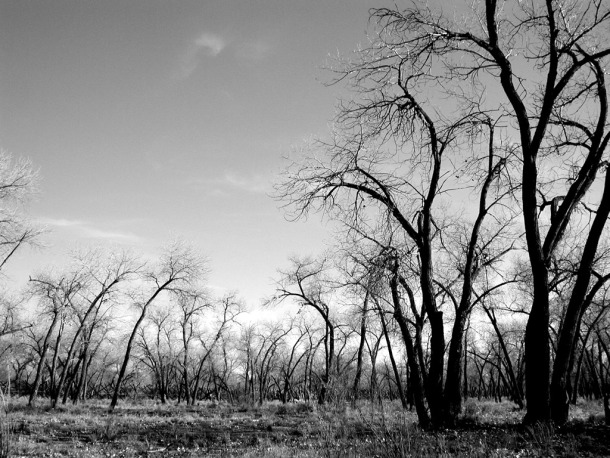 “After awhile, no one wanted to come here anymore. The wildlife fled or starved, and the remarkable feeling of being in a wilderness within a city, the feeling that your mother and I loved, was gone. That’s why it looks like it looks today.”

“Didn’t anyone try to stop him?”

“We did what we could. We attended meetings, we wrote letters, we called his office, we chained ourselves to a cottonwood. Our neighborhood association, and many others, signed resolutions opposing his plans. But in the end, the mayor won.  This is what his victory looks like for the Bosque.”

We stood up, pulled the tumbleweed thorns from our shorts, scowled at the boat launches tilted in the dry riverbed, and headed home.

Register your opinion at townhall.cabq.gov

Author Alex Escué Limkin is forming an action and advocacy team, DVR-6, specializing in the recovery and aid of homicidal and suicidal veterans in the backcountry. He blogs about his experience as an Iraq veteran at warriorswithwesthusing.org.

4 thoughts on “The Rio Grande Vision”