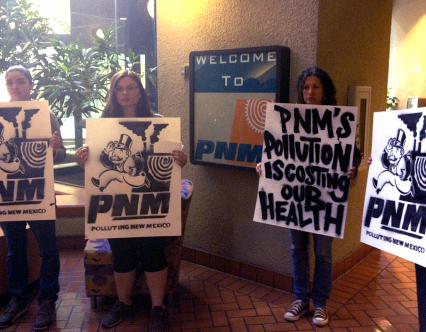 — Pollution from a Four Corners-area power plant has bothered its neighbors for years. They point to widespread respiratory effects and haze at nearby wilderness areas—not to mention associated public health costs.

An agreement reached on Friday, Feb. 15 could reduce the San Juan Generating Station’s environmental impact. PNM, the state’s largest utility, has promised to shut down two coal-fired units at the plant and replace them with a natural gas-fired unit. PNM will also install emissions controls on the remaining units over the next few years. (For details on that deal, see part one of this series.)

The Environmental Protection Agency called for large-scale changes at the plant to reduce pollution, but the utility and the state fought back in court. The struggle over San Juan is only the latest legal wrangle over environmental controls at PNM facilities.

In the recent battle with the EPA, the utility cited a 2009 upgrade as an argument for less strict controls at the plant. “We want to be as environmentally responsible as we need to be,” says PNM spokesperson Valerie Smith. 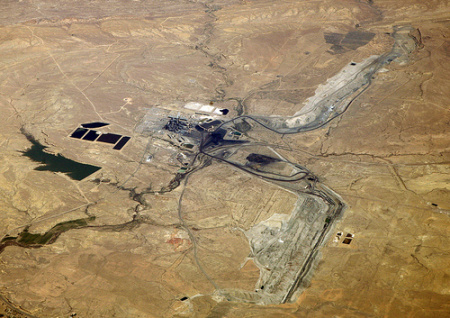 The San Juan plant and mine — Photo by dsearls/flickr.

That installation was done as part of a 2005 consent decree, or a binding agreement to end another lawsuit. The Sierra Club, the Environment Department and the Grand Canyon Trust had sued PNM for violations of the Clean Air Act.

PNM admitted to more than 40,000 violations of pollution limits and implemented a $330 million San Juan retrofit.

The utility went on to commit further air quality violations, which resulted in PNM paying the state a $6.9 million fine in 2009.

Mariel Nanasi from New Energy Economy says the fines weren’t a real penalty. “If you were speeding at 100 miles an hour and you got a 10-cent fine, there’s no incentive not to speed. Which is basically what happened when the state fined PNM. We need real regulation,” she says. “The Legislature and PRC have done little to no oversight of PNM, and they’ve gotten away with 60,000 air quality violations. That’s a crime against New Mexico.”

Ron Curry, then the director of the Environment Department, asked PNM to cooperate with the state and work to voluntarily reduce emissions and meet the requirement. PNM officials refused, saying it was too costly, and dragged their feet in negotiations. Curry warned PNM that should its emissions not improve, the EPA would probably get involved.

Nanasi from New Energy Economy says she has doubts about the department’s objectivity. The state plan for the San Juan Generating Station used PNM’s statistics. When asked about this, Jim Winchester from Environment Department says “NMED performed a full scientific analysis to verify we agreed with PNM’s predicted emissions.”

Nanasi counters that the department’s analysis can’t be considered independent because it uses PNM’s numbers.

Gov. Martinez received more than 1 million dollars from oil and gas companies during her campaign. The Environment Department’s chief counsel, Ryan Flynn, whom she appointed, is a former mining company attorney. Flynn oversaw the state’s lawsuit against the EPA. 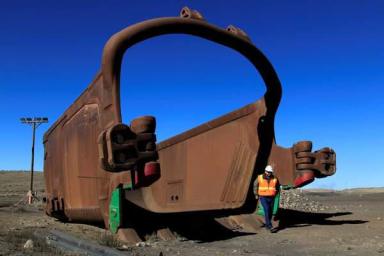 The Cost to the Navajo Nation

Stephen Etsitty, director of the Navajo Nation Environmental Protection Agency, says the region needs its power plants. “Should the plants close, our social programs and other services we provide for our people would be at risk.”

With the new agreement, PNM promised there will be no layoffs due to the changes.

The larger problem facing the Navajo Nation is that it holds enormous coal reserves, and energy policy is rapidly moving away from coal-fired power. “Our government is largely funded by money from coal and other natural resources,” says Etsitty. “The EPA didn’t take Navajo concerns into account.” 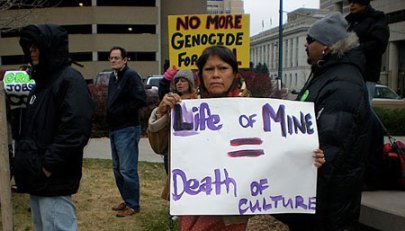 The concerns of the Navajo government and the Navajo people are not necessarily one and the same. Lori Goodman of Diné Care points out that “there are more than 300,000 people in the Navajo Nation. Those jobs help less than 1 percent of the population. They talk about how the money from coal goes back to the people. Less than 2 percent of that money goes to help the people. The people who live by the power plant never see it.”

PNM’s closure date for the remaining two units of the plant is 2053, but that may prove to be infeasible, as both federal and other state governments rapidly move away from coal. PNM owns 46 percent of the San Juan Generating Station. Some of the California utilities that co-own San Juan may bow out, as they face increasingly strict regulations on coal-fired energy in their home state.

Mike Eisenfeld, San Juan Citizens’ Alliance energy coordinator, says the plant will only become more of a liability for PNM. Coal is no longer a low-cost source of electricity, he adds. “It is becoming increasingly expensive to the companies that produce it and to the community. We can bury our head in the sand or work to develop alternatives that would be beneficial for the state, PNM, the Navajo Nation and the people who live by the plant.”

Nichols from WildEarth Guardians puts it this way: “The power plant, it’s like your car. Your car wears out. And at some point you need to make the decision: Do you buy a new, more efficient, spiffier car, or do you sink more money into rebuilding it? I think PNM is understanding that not too far down the road, they’re going to have to make these big choices.”