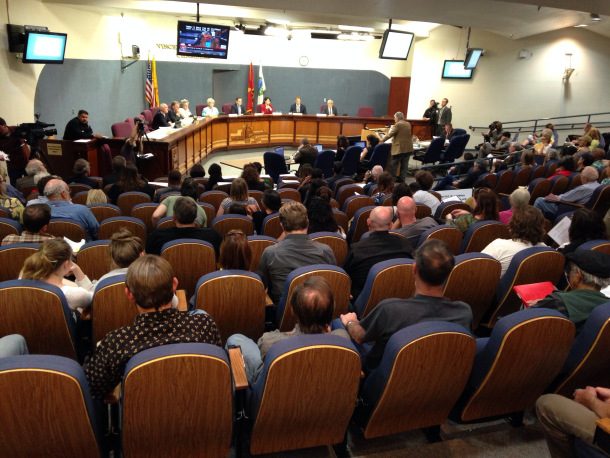 About 40 attendees signed up to speak to City Council members at the Monday, April 21 meeting. (Photo Credit: Carolyn Carlson)

“The airwaves belong to the people.”

“Give the civilian police oversight some teeth.”

“Listen to and stand up for your constituents.”

The public gave the Albuquerque City Council an earful before a packed house at the Monday, April 21 regular meeting. Most comments centered on the police department, including the continuing rash of officer-involved killings and proposed reforms of the civilian oversight commission.

The council didn’t act on any law enforcement fixes, though several are under consideration. One ordinance proposes to establish a new Civilian Police Oversight Agency with dedicated funding and more power. Another bill would suspend the current POC until a new oversight entity is in place. Both were deferred for debate at the May 19 meeting. An additional measure sponsored by Councilor Klarissa Peña seeks to add one-eighth of a percent sales tax to fund substance abuse and mental health programs.

Taking the Media to Task

The memorial and its supporters, including dozens of community groups, said the use of hateful and irresponsible speech in the media negatively impacts the civil rights of marginalized people.

Jessica Collins spoke on behalf of the Media Literacy Project. “This responsible speech memorial supports strong families, and it is a value statement that all of us can build upon.”

Text of the legislation says because a large share of local radio, television and print outlets is owned by a small group of companies, a variety of political perspectives are not aired and debated, leading to inaccurate depictions of marginalized groups. The resolution uses the pulpit of city government to call upon media in all forms, including on billboards and the Internet, “to do everything in their power to ensure that their on-air hosts and journalists use responsible speech.”

The ACLU’s Simonson said his organization agrees with the intent of the resolution and opposes language that promotes stereotypes and discrimination. However, “We don’t believe it is the place of government officials to urge the press and the community at large to censor their speech,” he said.

Simonson added that offensive or disrespectful or offensive speech is best counteracted with positive speech. “That is not a government role but the role of the citizen.”

Garduño responded that the memorial will not infringe upon First Amendment rights. “It is asking people to be careful in framing their attitudes about people,” he said.

The memorial passed 5-3 with Councilors Dan Lewis, Don Harris and Trudy Jones voting against it. Councilor Brad Winter was not present.

“Judges and police officers share one thing: power,” Kass said. “Anyone with that much power must be answerable to oversight.”

Kass said the Judicial Standards Commission is truly independent with the power to investigate and remove any judge, including state Supreme Court justices.

Former Police Oversight Commissioners Richard Shine, Jennifer Barela and Jonathan Siegel told the council they all resigned from their positions on April 15 because the city attorney’s interpretation of the commission’s powers and authority rendered it powerless.

“We were told we were not allowed to disagree with them,” Barela said.

Siegel said the commission is constrained by convoluted legal opinions of the city attorney. “I have spoke with many police officers who welcome oversight,” he said.

Shine said the city attorney undercut what little authority the commission had and made a mockery of civilian oversight.

In other business, Councilors heard an update on the police department’s Real Time Crime Center and approved the issuance of about $68 million in city general obligation bonds.

The next Albuquerque City Council meeting is Monday, May 5, at 5 p.m in the Council Chambers in basement of City Hall. Watch it on GOV-TV or at cabq.gov/govtv.