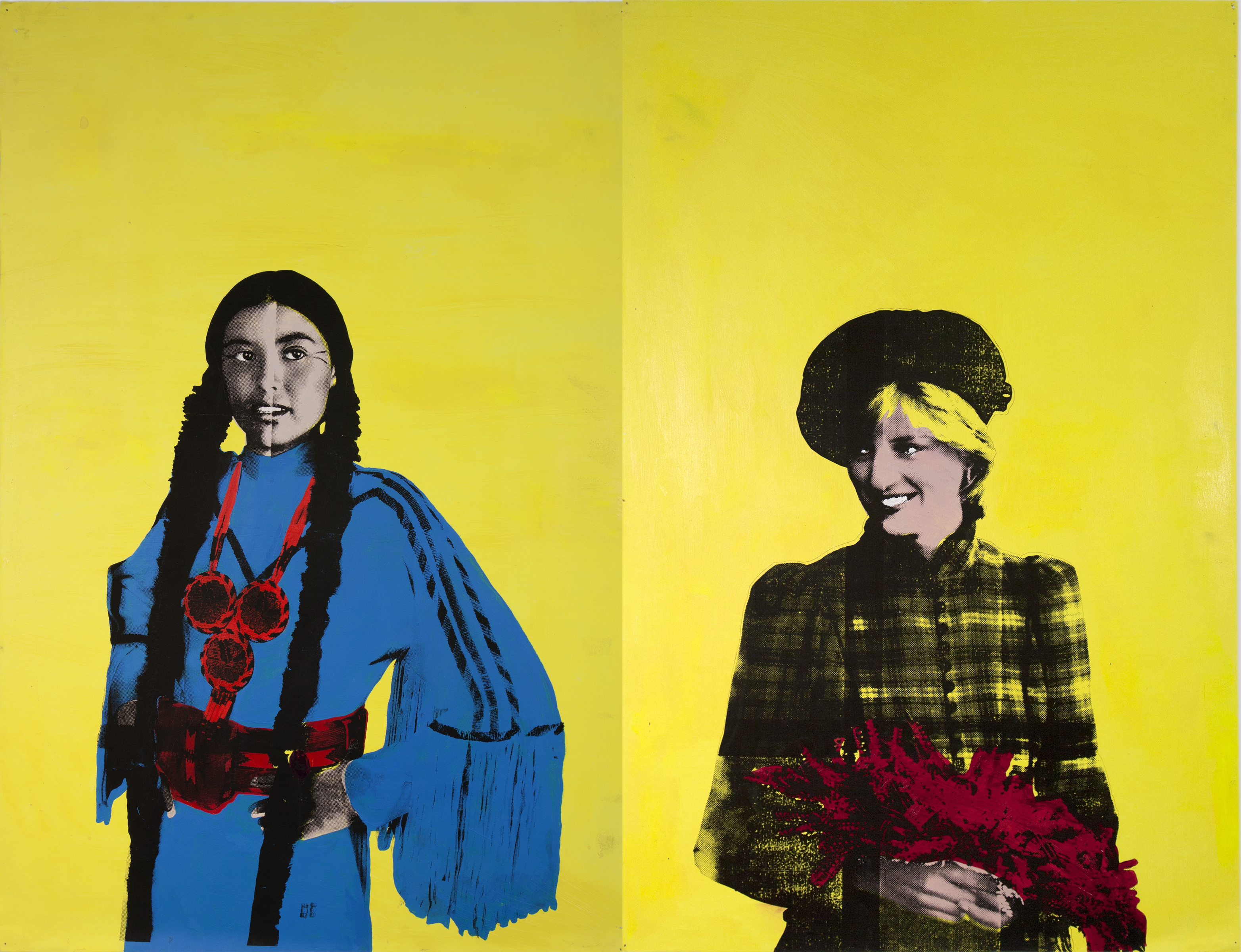 “Iakon:kwe (detail)” (2009) by Lindsay Delaronde. Image courtesy of the artist and MoCNA. Photo by Dianne Stromberg.Delaronde’s nod to Andy Warhol in MoCNA’s “Stands With a Fist: Contemporary Native Women Artists” is on one hand lighthearted. Familiar Pop-art imagery places a powwow princess on the same footing as Princess Di. It also raises questions about how female icons and are created, worshipped, standardized and sold—and by whom.

— Reaching Santa Fe’s Museum of Contemporary Native Arts may require a crossing of the Plaza where gutterpunks are playing guitars and singing loud enough to rattle the concentration of a pair of leather-fringed tourists fiddling with a camera next to the Soldiers’ War Monument.

The obelisk, testament to our state’s tension-riddled timeline of ethnic and political intersections, was created in 1886 to memorialize military men who died in New Mexican Civil War battles, along with “the brave victims who have perished in various wars with the savage Indians.” In 1974, an unidentified man hopped the fence around the monument and chiseled out the word “savage.” His unilateral editorial decision “ensures that the monument will remain a lightning rod for controversy,” wrote cultural geographers Mitchell and Staeheli in a 2005 research paper.

The tourists standing beside it appear unaware of these details. They’ve gotten their camera back in working order and are turning in the opposite direction to snap souvenir photos of the Native jewelry vendors lining the Palace of the Governors portico.

This sequence is archetypical Santa Fe. It also illustrates the saliency of an exhibition at MoCNA, “Stands With a Fist: Contemporary Native Women Artists” on display through July 31. The exhibit’s quality and content heighten the gratitude that wells up during the walk from the Plaza. It’s gratitude that the City Different’s character—perpetually tottering toward caricature, greed and pandering to hucksters whose bread and butter relies on bigoted depictions of locals—manages to be salvaged by deeper treasure: an enduring history of stubborn pluralism.

First standouts in the collection are a grouping of orbs on pedestals, part of the “Honoring Modern” series by Gina Adams. They glow from within, supernaturally balanced like irradiated flower buds with a coded language burned into the petals. The spheres nearly overshadow surrounding work, including Adams’ wax-veiled antique photos and a clay figurine by Melanie Yazzie, which seems at first to be a lonely little non-sequitur.

Closer examination of Adams’ spheres reveals the “Wilson” brand embossed on each one. They’re ceramic basketballs cast and coated with wax that she then altered with intricate etching. Her artist statement explains that basketball took root in Indian Country at boarding schools where indigenous students were forced to renounce their home languages and cultural practices. Contemporary youth continue to have a complicated relationship with the game; expert skills are coveted as a means to win college scholarships and a more prosperous life.

Another series by Adams, “Honoring Loss,” leads guests into the museum’s high-ceilinged central room. Here she repeats a new motif on little squares of watercolor paper: stark clouds in watery blue, an empty structure capped with a cross. And underneath the structure are her same geometric markings. The work, particularly its use of space as an emotional focal point serves as a transition into the exhibit’s larger-scale installations. In this gallery, the shape and lines of Yazzie’s aforementioned female figurine, which looked at first like an afterthought, are mimicked and amplified by two hulking, totemic metal sculptures. Their sharp negative spaces carve lacy shadows on the wall and floor—and upon anyone who moves between them to examine pieces by Natalie Ball and Merritt Johnson. These two artists both enact a physical effect on the viewer, but in the form of gut reaction.

Ball created a series of cloth quilts stretched across poles; they resemble protest banners or hand-stitched billboards. They also impart an unnerving combination of domestic comfort and raw political proclamation. Sections of the quilts are the result of delicate handicraft, yet they appear backward and inside out, with uneven edges, seams exposed and threads dangling. And rendered in paint on rougher sections of fabric are crude yet deliberate lettering and petroglyph-like outlines of human forms. Titles of the pieces, such as “Incident at Fort Klamath,” point to historic events during the colonialization, rebellion and relocation of the Modoc tribe that Ball counts among her lineages.

Johnson’s grouping of mixed-media pieces at the other end of the gallery also seems to be a re-imagining of history, but in a more figurative sense—though the visceral impact of her results is anything but abstract. She uses lush, decorative folds of cloth to emphasize, obscure or reveal unnerving sculpural details.

In one piece placed across the floor, a taxidermied rabbit uses plastic cup stilts and a stethoscope to navigate a rug bulging with the outline of a snake lying in wait underneath. A tiny stone obelisk juts out from a forest-green fold affixed to the gallery wall. (And which, it should be noted—at the risk of reading too much into it—is reminiscent of the Plaza monument.) Her most affecting pieces are two seated, cloth-sheathed figures. They face each other, dripping tassels and beads. Balanced in the lap of one (“She Drinks Mens Teeth,” reads the title) is a glass with what looks like amber liquor with a fishing lure and a couple of human molars in it. Onlookers may try to reassure themselves the work is inanimate, but the figures’ blind, silent regard of the room is unnerving.

The standalone work of Kade Twist also radiates a kind of quiet foreboding. His installation “For Instance, Consider the Land Beneath Your Feet” is separate from the main exhibition, but it offers both spatial and thematic symmetry to the video and poetry by choreographer and poet Tanya Lunkin Linklater showing at the other end of the museum.

The premise of Twist’s visual/aural projections is straightforward: Camera and mic roll as two Phoenix, AZ real estate agents run down of their version of events following the implosion of the city’s bloated housing market—one of countless tiny links in a chain reaction that led to 2008′s larger implosion of international banking systems and interlinked global economies. Twist chops and screws the two monologues, amplifying, merging and splicing the characters’ litany of financial lingo and their frequently frozen, marketable smiles. The result is an interrogation of what truly constitutes success, profit and loss.

Outside in the sun-baked courtyard is a mural (“Manifestations of Glittering World”) by Albuquerque-based Nanibah (Nani) Chacon. The museum commissioned the painting as part of the group showing. A woman forms the center, the axis of her body and  angles of her limbs merging with a deceptively simple geometric pattern Chacon created on the wall, as well as with lines of the neighborhood’s old adobe buildings. The woman cups a handful of the surrounding red sand; it runs through her fingers and back to the ground. The symbolism of her gesture—its focused contemplation of  place, time and creation—is one both cynical locals and novelty-struck tourists might take to heart.

Admission: $10 for adults; half-price for seniors (62+), students w/ valid ID, and NM residents;  free for members, Native people, veterans and their families, youth (16 & under), and NM residents visiting on Sunday.