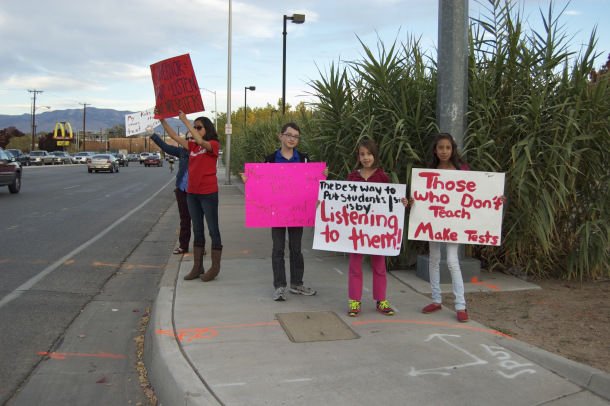 — As a meeting for school district administrators convened yesterday at the National Hispanic Cultural Center, a grassroots counterpart gathered outside. The event came on the heels of last week’s Stand 4 Kids NM rally, which saw hundreds of educators and community members protesting reform measures touted by Gov. Susana Martinez’ administration.

The meeting was hosted by the state Public Education Department to further clarify the state’s evaluation plans for principals.

On the sidewalk alongside Avenida Cesar Chavez, a group of about 20 parents, students and teachers held up signs protesting the increasing use of standardized testing. A steady chorus of passing car horns blasted in response.

Gerry Schneider, retired after 35 years in the classroom, said resistance to policies pushed by Martinez and the state’s Education Secretary-Designate Hanna Skandera has been growing. ”This is not a union movement. Most of the people here today are parents, not just teachers. The taxpayers have a real stake in this.”

In his former job as an instructional coach responsible for helping administer standardized tests, Schneider watched exam requirements increase every year, adding to disruptions in regular classroom instruction. ”For example, a first-grade teacher has to do a test with an individual kid that could take 35 minutes. That’s 35 minutes that she can’t pay real attention to her classroom,” Schneider said. “That’s what really aggravates teachers. They don’t want to test, they want to teach.”

William Swanwick is a third-grade special education teacher at Los Ranchos Elementary who graduated from Albuquerque Public Schools. He said he decided to add his voice to protests against PED’s spate of policy changes after learning about Skandera’s associations with former Florida governor Jeb Bush’s Foundation for Excellence in Education, as well as her lack of classroom experience.

Widespread confusion about policies and expectations also spurred him to get active, Swanwick said. ”No one knew exactly what was going on at the beginning of the school year. There were very in-depth lesson plans that were nonsensical for what I do. And there were just a lot of these generic protocols that could never really be met in my classroom. If you look at the teaching rubrics, there are things that don’t even fit my grade level and the level of special ed that I teach.”

He described the staff morale at his school as “terrible.” ”I know for a fact that a lot of people who are able to retire, have been. Other people have moved. It’s not anything that’s enthused teachers to actually teach kids, and that’s what you really want—staff that is happy and working with children and all learning together.”

Swanwick says teachers also feel disheartened by depictions of them as resistant to change and improvement. “Reforms can be done in a way that make sense. These reforms are not meant to do that, and they’re not truly research-based.”

A fifth-grade teacher and education veteran described the changing landscape of her job during the past several years as overwhelming. She said that kids in her class read at levels that range from second- to eighth-grade. Also in the mix are English-language learners and special education program participants. Some of her students with identified special needs are pulled out of the regular classroom for individualized instruction every week. Still, she said, her school runs on a bare-bones staff. 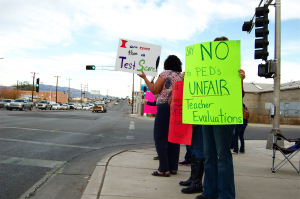 Teachers and parents protest outside a Public Education Department meeting for school administrators on Monday, Oct. 28. — Photo by Margaret Wright

“It’s ultimately up to one teacher in each classroom to figure out how to manage all the learning levels and help each of them make 6 percent gains in reading. As much support as I can give them, it’s never enough. I’m only one person. Trying to reach everyone and provide an individualized service for each kid is nearly impossible. Now, if I had 10 less kids in the room … ” she laughed. Meaningful reforms, she said, would decrease class sizes and place specialists in every room, offset teachers’ purchases of school supplies and create consistent interventions for kids struggling with reading and math.

She echoed Swanwick, adding that educators’ morale is at an all-time low. “The evaluation system is very time-consuming and very punitive, and our principals are under huge pressure. Our school principal finished the first round of evaluations and has to start the second one without a break. That, along with the pressure of all the required gains and all the testing—it’s round after round, one after the next, and everyone, including the kids, gets deflated.”

Chantille Robnett, a mother of three APS students, said she’s grown increasingly frustrated as state mandates to increase the administration of standardized testing have trickled down to her kids’ classrooms. ”It seems like they’re constantly taken out of their learning routine for testing schedules and their learning, and I don’t think it’s helpful.” She added that she’s not against testing, and data can be helpful in evaluating trends. “But our teachers are spending weeks trying to teach to the test and aren’t given the opportunity to help our kids be creative and think outside the box. Teachers aren’t going to be able to do all that, because they’re so focused on testing to a narrow set of standards.”

Robnett’s eighth-grade daughter said she’d attended the rally with her mother to show support for her teachers. ”They’ve taught me well, and they’re the reason I know what I do and how I can read and do all the things I enjoy.” She estimated that her class has spent about a week preparing for and taking standardized tests so far this year.

“The SBA already takes days to complete,” she added, “and then on top of that you have days just preparing for it, learning how to do it, what’s going to be on it—instead of them teaching us what we need to do later on.”