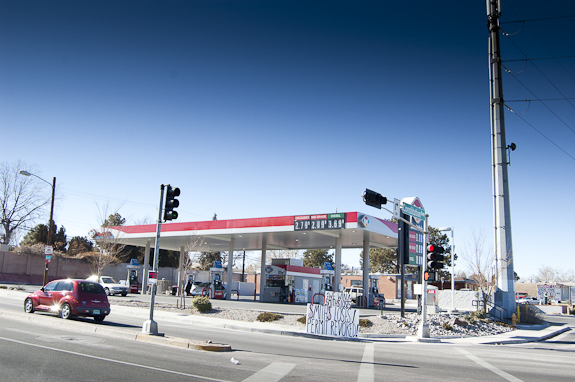 The Air Quality Control Board overturned a decision allowing this Smith’s gas station to pump more than the company originally proposed. (Photo by Margaret Wright)

— People living near the gas station on Constitution and Carlisle in Albuquerque have been fighting an uphill battle since the station set up shop in 2010. Finally, they have reason to feel optimistic.

Nearby residents have been concerned for years that the high volume of sales results in serious pollution, traffic and safety issues. Earlier this month, the Air Quality Control Board reversed a permit allowing the Smith’s station to sell an extra 1.2 million gallons of gas every year. “It’s still something we fight every day,” says Pat Toledo. “After the last meeting, we finally felt like we were getting somewhere. That was fun.”

Toledo says the campaign against the gas station is rooted in the belief that it’s a public hazard due to emissions, increased traffic flow through the intersection and the poor management of delivery trucks. “There’s not enough space. Every time the tankers come, they’re sticking out into the street,” he says. “They’re just waiting for an accident here. If one of those tankers explodes, it can take out four city blocks.”

The Air Quality Control Board was the last recourse for neighbors since the site had already been zoned for commercial use, says Bill Westmoreland, environmental health deputy director.

Toledo says neighbors gained ground when board members reversed the permit that allows the station to go from selling 3.3 million to 4.5 million gallons a year. 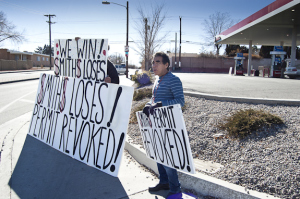 Pat Toledo, who lives near the Smith’s station, publicly celebrated the Air Quality Control Board’s decision. “There are splits in the neighborhood” over the issue, says Toledo. He adds that he’s concerned inadequate site planning for the business poses safety hazards. (Photo by Margaret Wright)

The permit was issued in April 2012 and was the subject of the three-day hearing in August. At the end of the year, Hearing Officer Felicia Orth recommended the city sustain the permit.

Board member Stephen Baca proposed a motion in January reversing Orth’s recommendation. The motion states the board is required to protect public health and welfare and “the quality of life concerns raised by the community could be indirectly related to air quality.” It was passed with a majority vote. At a Wednesday, Feb. 13 meeting, the motion was adopted. The board will likely revisit Smith’s side of the story at its March 13 meeting.

Westmoreland of the Air Quality Division says he believes the board does not have the power to reverse the permit once issued. The division created the board to help with rules and laws. “They can approve something in a public forum but cannot go back and reverse a decision,” he says.

Deputy City Attorney Adelia Kearny says the board’s decision stands. “The air quality control act gives the board certain powers, and regarding permits, they can hear challenges to decisions by the division,” she says.

Though the decision has been made, Kearny adds, the city is expected to appeal. “The permit writers and the public and the regulated community need to know that when the division does everything it is authorized and required to do, that will be supported.”

One thought on “Smith’s Gas Station Under Fire”