Trending
You are at:Home»Film»Kids Today! (Wait, What Year Is It?)
By nmcompass on March 7, 2013 Film

By James A. Montalbano

— From the DVD files, two takes on teens. And we’re not grading on a curve.

The Wise Kids (A-minus) is a sweet, heart-swelling drama centering around three teens in Charleston, S.C., on the brink of adulthood, during the spring and summer before college, all wrestling with their faith to various degrees. Brea is the preacher’s daughter who is mired in doubt as she starts to think independently and question the teachings of the church and her parents. Laura, who can feel Brea’s friendship slipping away, doubles down on Jesus, exploding in occasional outbursts of fundamentalism and refusing to yield on the literal word of God. Tim is in the middle, loyal to his Christian faith but not ignoring his burgeoning homosexuality.

Writer/director Stephen Cone anchors the story as a church leader and music/theater director questioning his own sexuality. Elizabeth is his wife, suffering with heartache and longing; it’s hard to tell if she’s crushing on the new youth-minister candidate or just his happy marriage. If that all sounds melodramatic, it very well could have been. But Cone strikes the perfect tone throughout, not afraid, for instance, to let a glance take the place of dialogue. He has an effortless way of conveying awkwardness.

And his no-name cast is pitch-perfect throughout. Molly Kunz as Brea is the big bat in this lineup, and she carries the story while remaining restrained and refined. Tyler Ross as Tim is sweet but substantial, though Ross’s Michael Cera shtick could get old if he gets typecast as “the budding gay filmmaker” (see his turn in the wonderfully quirky “Nate and Margaret“). Allison Torem is just the right kind of manic as Laura, who is kind of the wild card here. At two different junctures she feels compelled to remind others that just because she takes an Originalist approach to the Bible doesn’t mean she’s stupid; it comes off as a fascinating echo rather than redundancy or filler. And Sadiah Rifai is a revelation as Elizabeth; Cone methodically peels back the layers of Rifai’s physical beauty while simultaneously unpacking the depths of her character, scene by scene.

The whole film is beautifully layered. While the story is steeped in the tension between Christianity and sexuality, and two of the main characters struggle with coming out, no one utters the word “gay” until the final reel (if I’m not mistaken). And that typifies Cone’s confident, masterful touch as both a screenwriter and director. He gets everything just right.

On the other end of the grading scale, we’re reminded that the transition from tween to teen sometimes veers off into twee.

The cartoonish memoir The Perks of Being a Wallflower (D+) is a mawkish mix-tape masquerading as a movie. Writer/director (and source material author) Stephen Chbosky aims for something in the general direction of John Hughes and Augusten Burroughs with this autobiographical tale of his high school days and falls embarrassingly short.

Our hero, Charlie, is a little cipher whose childhood trauma is revealed slowly in clunky flashbacks (trapping the brilliant Melanie Lynskey in a thankless role). The bookish bore is surrounded by the Breakfast Club’s understudies, each one a cardboard cut-out that’s about as fresh as Dobie Gillis. Freshman Charlie pines for the cute, damaged Sam, who welcomes him into her clique of fellow seniors. Will clueless Charlie make his move before Sam goes off to Penn State? Will they all defeat their adolescent demons? Will Sam even get accepted into Penn State?? Oh, boy, won’t this all make a swell novel someday!

The movie stumbles out of the gate by throwing wildly different eras of music at us, and we are taken out of the film while we try to figure out just exactly which era we’re supposed to be in. In one scene our precocious teens are declaring “Come On, Eileen” to be “cool” when played at a dance (the gee-whiz kind you’d expect to be headlined by the Archies), and in the very next scene Cracker’s “Low” pulses at a party while innocent Charlie is tricked into getting high for the first time (revealing the brooding nerd to be a veritable Jerry Seinfeld—those rascals!). Are we in 1982? 1993? When exactly was the heyday of mix tapes, cordless phones and goth girls? Sam’s favorite song is by the Cocteau Twins, but Charlie gives her a Beatles 45 as a gift. 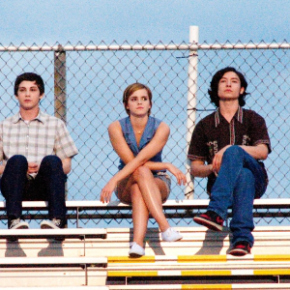 Once we finally agree that what we’re watching takes place in the early ’90s, just so we can get on with things already, here come the ’70s, perversely fetishized throughout. Chbosky threatens to ruin David Bowie’s “Heroes” the same way Moulin Rouge murdered “Your Song.” (By the way, Stephen, you’re way late to the “Heroes” party now, and you were in 1993 — when you were 23.) And is there really any insight or emotion left to wring out of Rocky Horror fandom? (Not just one scene begging to be edited here but two.)

In the end, this is little more than Chbosky’s scattered aging-hipster soundtrack full of painfully obvious alt-classic tracks from the likes of The Smiths and Sonic Youth, used as a device to string together moments of melodrama.

And the cast is directionless. Paul Rudd is cloying as Mr. Anderson, the English teacher who feeds classic novels to Charlie because, darn it, he just knows that the kid will one day be the novelist that good ol’ Mr. Anderson never will be. This is my first experience with the manic pixie dream girl Emma Watson, and she gives it the old high school try as Sam, but she and fellow 20-something Logan Lerman, playing Charlie, show the depth and nuance of a pair of Muppet Babies.

This isn’t so much a period film set in the early ’90s (we’re pretty sure), as it is a parody of a cheap TV drama made in the early ’90s. Would you believe they actually still greenlight movies in the 2010s in which a student does his impression of the shop teacher in front of the class … only to have the teacher walk in at that very moment! Or a movie where a character, talking on the phone with that crazy chatterbox friend, lays the receiver down mid-conversation, walks away and returns later only to find her still gabbing away. Or a movie that places an interminable Christmas scene at the pivotal halfway point, one in which the hipster kids give each other just the right secret-Santa gifts, such as a vintage typewriter or a suit and tie … that just happens to fit perfectly.  Or a movie where the jocks trip the nerds, sparking a fistfight in an inexplicably unsupervised cafeteria and revealing one character’s superhero-like strength. (And, of course, one of the football stars is a closeted homophobic gay blockhead.)

Toward the climax, one of the kids actually compares the narrative in progress to an “ABC Afterschool Special.” (You, sir, are no Lance Kerwin.)

And what’s the lesson we’ve learned, boys and girls? Just because you can write a novel—and Chbosky’s book could very well be brilliant—it doesn’t mean you can write and direct a movie. During that endless Christmas scene, Sam urges Charlie: “Write about us.” I’ll bet the real Sam wishes she could take those words back.

James A. Montalbano is an Albuquerque lawyer and former newspaperman. Follow him on his film blog, ABQ AV Club, which originated at the old Albuquerque Tribune.