— If our individual corners of the Internet hardened into tangible territory—if the bells and whistles, alerts and strata of contacts took form—the result might resemble a public square tiled with soapboxes and amplifiers, family members, work associates, near-strangers crammed elbow-to-elbow. Everyone quoting news bytes, devouring photographs, shouting for their mundane or too-intimate details to be heard over the others’ in deafening cacophony.

Andrew Lyman sought artistic refuge in a more desolate version of cyber-reality. A self-described experimentalist (i.e., multi-format artist, programming wiz, art event taskmaster), he lives and creates out of The Tan Gallery in Albuquerque’s Barelas neighborhood. There in the gallery’s back rooms, an image took shape in his mind of a forgotten world wide web, depopulated, brigands sifting through leftovers.

The analogy took shape as Lyman considered what was left of Myspace and other social networking platforms—former boomtowns withering in the shadow of the newest trendy meeting place. Think Facebook’s seemingly unstoppable primacy and the now-quaint memory of its forebears. (Can you conjure a distant memory of Friendster? Livejournal?) Lyman says these abandoned networks reminded him of cities like Detroit or fading towns that dot the U.S.—once-bustling population centers where the economy dropped out and people drifted away to flashier opportunities.

Lyman wondered if he might employ his skills as a program coder “to play around around with the idea of whether in a virtual abandoned space there’s still any utility left. Can it be repurposed, can it be recolonized like in other urban situations?” 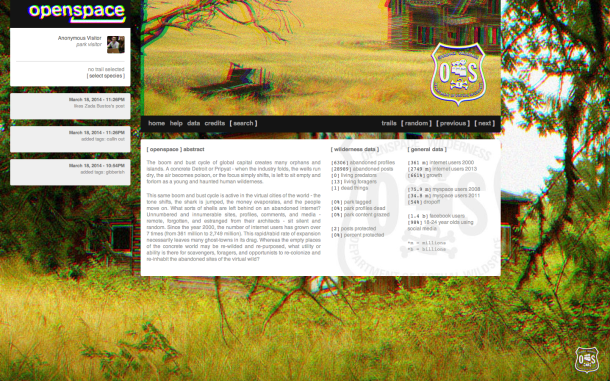 Lyman created imagery by amassing creative commons-licensed photos and tweaking them in Photoshop. He says he wanted the site to feel lonely and desolate, to strike a balance between clean and cluttered. (Image courtesy of Andrew Lyman.)

He also pondered if within that potential for transformation might be a crouching possibility for things to veer more toward anarchy than clean gentrification.

“I was thinking along the lines of re-wilding,” he says. ”Like abandoned urban spaces, if really left to just sit—scavengers and opportunists move in. You get actually healthy populations of coyotes and raccoons and deer, and you can get squatters. There are more wild agendas that repurpose this once-civilized, structured place.”

Lyman’s curiosity didn’t begin and end, however, with how the metaphor might be illustrated digitally. He wanted his ghost network to be interactive and capable of alterations by the those who inhabit it.

Crawling Out an Openspace

The idea was pitched almost two years ago to a panel at Turbulence.org—one of the only U.S. organizations to consistently support Internet art since the form emerged in the mid-‘90s—and Lyman was awarded a commission from the National Endowment of the Arts to make his ghost site live, navigable. He christened it Openspace. For source material, he wrote a web crawler to automatically scavenge old networks. Text dug by the crawler would be used to model a new project after the then-languishing Myspace. But a rebranding effort after Justin Timberlake bought out the site made a back-end dumpster dive impossible.

Lyman searched out other lonely networks. Prior to 2009, says Lyman, profiles clustered together at the pre-Google version of Blogger.com were tracable by an incremental 9-digit ID string. “After that,” he says, “they go into this semi-randomized, encrypted, 15-digit string that’s no longer traversable. But if something’s incremental, you can write a program that can crawl it.”

The web crawler he formulated worked like a kind of automated metal detector, honing in on old blog content and dumping it into a giant text file Lyman could then sift through. He concentrated on profiles that hadn’t been touched in at least six years, quickly amassing text from thousands of entries. With that, the initial analogy of the project expanded to include what Lyman refers to as “a staked-off archaeological site.”

Each visitor can engage with it as an anonymous tourist, free admission, free reign to explore strange paths.

“When it goes live, it’s kind of up to people to wander the collection,” says Lyman. “Stuff can be tagged, and through tagging, trails are made through the system. You can then hop onto a trail and traverse all the profiles other people have tagged. It’s not a parseable chunk of information for any one person to handle, so it’s sort of like—I don’t know what’s in there, so let’s see collectively what’s been uncovered.”

When people enter the site, says Lyman, it’s as tourists, “checking out the enclosure, walking its trails, taking in the sights.” But participants can also choose to engage as either predators or foragers, “and there are population dynamics of those two species classes,” he adds, each with specific actions that alter the space.

Predators as they explore encounter other active species and eat them, consuming the others’ energy and leaving their carcasses behind. Forager species aren’t deadly, but they’re still destructive. They graze on content of the old blog posts, a process that irreversibly removes chunks of the archived blog text. To provide counterbalance, Lyman inserted the ability for preservation-minded visitors to tag content as “protected” and therefore roped off from roving foragers.

“Over time,” says Lyman, “the park could become littered with dead bodies and overgrazed. This was something that was important and fascinating to me. I don’t want to have total control. I want to turn it over to others so that it has a kind of life and dynamic of his own.”

Lyman’s approach to “openspace” seems aligned with what Turbulence.org co-director Helen Thorington has observed among artists whose primary concerns transcend commercial acceptance.”There are now lots of people out there doing experimental artistic work of one kind or another, but they are not paying attention to the regular art world or people who might fund them. They’re just doing it because they want to do it.”

Surveying the borders of his creation, Lyman found the blog artifacts he was uncovering to be at times compulsively readable.

“It’s grabbing a point in time, but it’s also this random voyeurism,” he says. He scrubbed identifying details of the original blog authors because “specific voyeurism is at least disinteresting and, at most, kind of dodgy territory.”

An added side-effect of the imposed anonymity, posits Lyman, is that an ordinary person’s thoughts can take on broader meaning.

“Stripping the personality of it produces a different layer of information that’s really interesting, kind of weird and mundane. It’s like going through some old house full of these bins of things, but on a large scale. And that’s the main function of the site. It’s this kind of archive that was just acquired, staked off, with no desire for completion because it’s beyond massive. But as the Internet grows to be a bigger and bigger place, compartmentalization and curation is kind of like the only way there’s access.”

In a painfully fitting twist, Lyman discovered that his benefactors weren’t able to host Openspace as they’d hoped to. Turbulence.org co-director Helen Thorington, who’s based in Boston, explained over the phone how Lyman’s project themes of digital ephemerality and obsolescence have specific resonance for her and her artist associates: The disparity between new and old programming languages has endangered her organization’s seminal database of Internet art. As platform developers abandon their own outmoded technology, they leave work created with it in limbo.

“We’re in this incredible bind,” says Thorington, “where technologies have changed, and of course artists want to use the new technologies. But if we install them on the server, it would destroy the old work.”

Unconsciously echoing Lyman, she adds ruefully, “There is no clear path forward.”