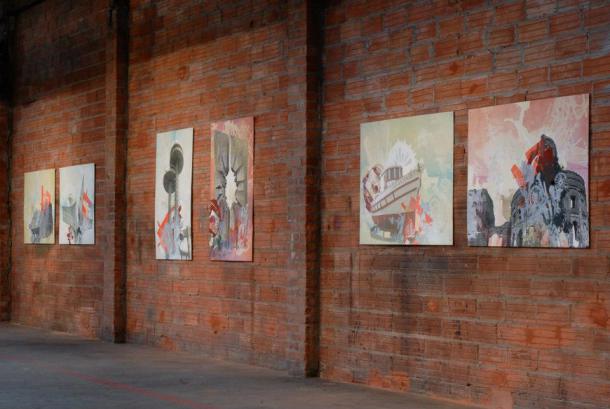 — Maybe it wasn’t intentional. But the setting for printmaker Frol Boundin’s solo show at SCA Contemporary reverberates with his work.

In industrial north Downtown, between a stretch of weeded-over rail line and the traffic tides of I-40 (a.k.a. “Coronado Freeway”), the gallery feels like it’s moored amid symbols of how the West was won: colonial conquest, steam locomotion, inexorable dominance of the automobile. The week after Boundin’s show opening on March 8, heat outside the gallery’s brick walls is unseasonably oppressive. A public service announcement over the radio warns Albuquerque metro area residents that water utility officials are on watch due to unrelenting drought.

Suspended just inside the gallery’s front door as the entry-point to the exhibition is Percy Bysshe Shelley’s ode to a ruined kingdom, the sonnet “Ozymandius.” It amplifies the note of tension detected outside. “Two vast and trunkless legs of stone / Stand in the desert … Round the decay of that colossal wreck, boundless and bare / The lone and level sands stretch far away.”

Posted opposite the show’s first image—a ghost outline of a ship’s hull overwhelmed by creeping black flowers—the artist’s statement picks up the refrain: “History is over.” 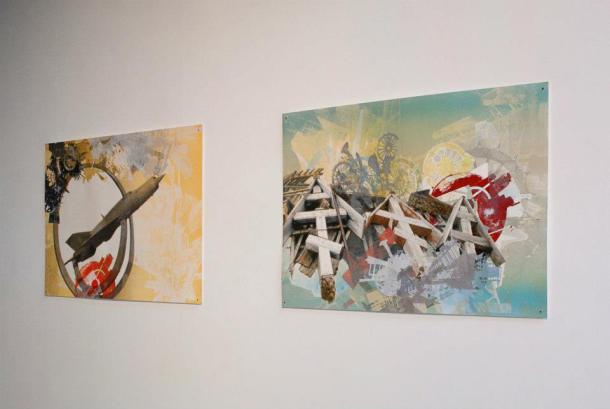 Boundin’s works resemble oversized postcards from a recurring dream—a feverish one, lucid, in which the end times have finally landed. His unabashed use of color heightens the sense of anxiety created by the prints’ intricate layers.

And upon close examination, those layers seem to have been formed through a process of excavation—even violence. An element repeats throughout the majority of prints. It’s a tractor wheel (which resembles a sundial), so heavily embossed that it leaves raised marks, like welts.

Each piece has as its center a hulking grayscale form drawn from Internet archives and blown up into white-noisy pixels. There are empty World’s Fair towers; neglected metro marquees shedding their letters; public sculptures commissioned by a collapsed Communist regime now left to weather. Encroaching around the periphery are other man-made objects, cut out, merged, collaged and composed so they’re at first mistaken for organic matter.

“I’m not inspired by the human form, which is temporary,” says Boudin, his inflection thickened by remnants of a Russian accent. “Symbols are what really interest me.” 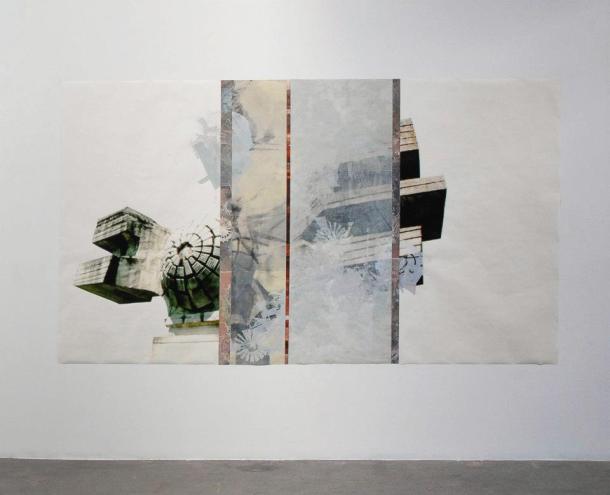 Born in St. Petersburg before the fall of the Iron Curtain, Boundin began his study of art at an early age. He spent afternoons of his primary school days at a state-run academy rendering still-lifes. (“Apples,” he says wryly. “Lots and lots of apples.”) His grandfather was a professional artist barred from showing work publicly because it didn’t adhere to the Soviet government’s romanticized, pre-approved styles glorifying the motherland and working-class struggle. Instead, his grandfather mostly stuck to what Boundin refers to as “children’s paraphernilia”—books, film strips, little cards. “His graphic style has always had an indirect influence on my own approach,” says Boundin.

His family decided to immigrate to the U.S. in 1990. They settled in New England, where his parents resisted glomming onto the Russian immigrant community. High school-aged Boundin found himself immersed, “sink or swim,” in American youth culture. After he graduated, he says he bummed around, couch-surfing through Northeast cities, road-tripping across the country. “Because of my path across this country and this culture, history is a preoccupation,” he says.

He finally landed in Chicago, and art school. After a deep immersion in the city’s art scene, he found himself drawn to the University of New Mexico.

Coming to the desert, he says, was as much an intuitive choice as a scholastic one.

“I’ve been deeply influenced by ideas of history that are more on the surface here,” he says. “Albuquerque is older than St. Petersburg. In a weird way, I can compare it to where I came from.”

Boundin rides his motorcycle around the state every chance he gets, noting along the way that here both ancient and modern histories are well-preserved (“maybe not particularly on purpose,” he says). Gradually his forays into the landscape have taken on grander purpose.

He pushed West, out to California’s Salton Sea. An article published in September in Wired magazine refers to the area as “a natural wonder, a national embarrassment, paradise, and the ecological equivalent of the Chernobyl disaster.” Boundin collected photos and artifacts from the boom-and-bust ghost settlements surrounding the manmade waters. His experience there, says Boundin, triggered “a very emotional response”—one he attempted to express in a series of abstract lithographs. 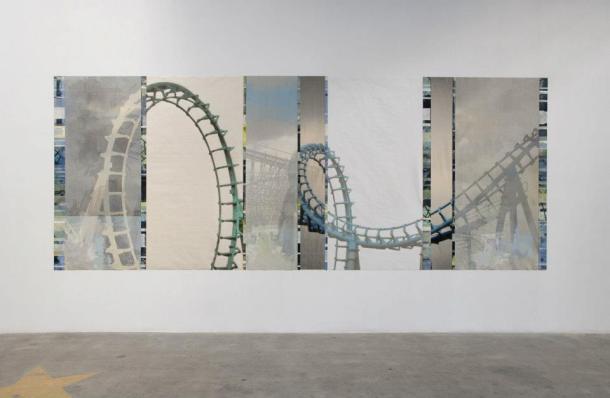 Print artists typically restrict themselves, he says, slavishly sticking to conventions of color, chemicals, the size of prints. “I was frustrated with the blind devotion to the craft. I wanted to do something reactional, painterly, improvisational.”

He started assembling and combining images, which he’d print in multiples and halftones. He cut large-scale steel plates for etchings, traced vinyl from record pressings for inked monotypes laid on top of the etching plates. The industrial scale of his experiments allowed Boundin to create hundreds of prints every day. It also freed him to delve into deeper thematic territory.

Boundin continued his road trips, this time across the deep South. He came across “impromptu museums,” accidental sculpture fields of tractors lined up in the middle of the woods without explanation. He also spent hours combing through online archives of images, printing the grainy documents of manmade objects left to rust in the elements.

“I wanted to search for a truly American monument. At what point does a personal monument become distinctly American? I was looking for that one object—the object that would crystallize my thoughts on transformation, history, memory.”

He points to the central image in his exhibit, a yawning spiral outline of a roller coaster. It’s culled from an anonymous Flickr photo of Six Flags amusement park in New Orleans. The place was devastated and shuttered after Hurricane Katrina, all but forgotten.

“Without memory, we don’t strive for grandiose achievements,” says Boundin.

The potency of these structures, he says—nodding at the New Orleans piece—makes him think he may have reached a conclusion in his investigation.

“It makes me think of humanity looking toward the future,” he says. “And failing.”