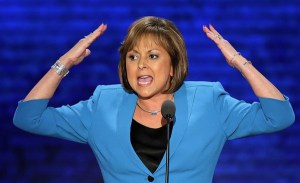 — Some variation of this sentence has been repeated by Gov. Susana Martinez so many times that it is widely accepted as her pocket description of a successful first term:

“I balanced the state budget without raising taxes or cutting services, and I did so while we were in the deepest economic recession in recent memory.”

The claim has been cited in national publications’ reviews of up-and-coming GOP superstars, used as evidence of her qualifications for serious consideration as a vice-presidential nominee. And there is not a word of truth to it.

If any single piece of it were true, Martinez would have a valid claim to have accomplished something important. But it is entirely fabricated, a PR illusion, a mirage—not a triumph. It is campaign puffery, nothing more. Let’s dig into each falsehood.

“I balanced the state budget … ”

It is not a technical quibble to note that in our system in New Mexico, it is the Legislature which creates the annual state budget, not the governor. In fact Martinez, unlike her predecessors, hasn’t even bothered to craft what’s called a “straw man” budget against which the real budgetary drafts might be measured. The actual state budget is hammered together through a painful 6-month-long process by the Legislative Finance Committee.

The approach her administration has taken is far lazier. While she is supposed to submit her budget version by the first of the year, she typically misses the mark—or, in other words, waits until the session is underway before submitting a what can only loosely be called a “budget.” Patently her efforts amount to little more than a tweaking of those prepared by the LFC, not a thoughtful measure reflecting well-planned initiatives.

So it has been, as it has always been in our history (indeed, as it is required to be by our state Constitution) a balanced budget that gets enacted annually. But it has been balanced each year by the Legislature, not by the governor.

It was the Legislature that blended new revenue with savings “sanded” from department requests to come up with not just balance but excess money banked as reserves. It was the Legislature that bumped its head against the wall, that contorted itself in the agony of balancing interests, and that took the hits for saying “no” to every request, no matter how bad the need.

If there has been an administration less-involved in the budgeting process, I can’t remember it.

With this statement, Martinez ignores the fact that the Legislature pushed her predecessor into signing a major tax revenue bill in 2010, the year she was campaigning. The positive impact of that measure was felt in the state’s treasury in 2011, her first year in office. So while she hasn’t signed any revenue bills, she has certainly benefited from the extra money the Legislature raised.

Wow! There’s a doozie! Even with the added tax money, our 2011 and 2012 budgets reflected many serious cuts in services: lowered reimbursement rates for Medicaid providers; caps on day care slots; miniscule raises for public employees, who were asked to simultaneously pick up part of the state’s share of their retirement benefit; higher education cuts so deep and so numerous she dare not repeat her catch phrase on any campus in New Mexico for fear of being laughed off the stage; public education budget reductions which have led to larger class sizes, heavier teaching loads and fewer support services available, and on and on and on.

Let’s just summarize by saying there have been a lot of cuts, and we are only now trying to restore some of the deepest. Without the major infusion of federal money that the short-lived stimulus package provided (especially for schools and Medicaid), we would have been in an even-deeper trough.

“ … while we were in the deepest recession in recent memory.”

This is self-serving. It makes her challenge sound greater than it was and inflates her heroism. It, too, is not true. By the time she took office, in January of 2011, the recession of 2008 was receding. The worst was over. Ex-Gov. Bill Richardson took the brunt of the hits, not Martinez. It had been terrible. It is not yet great. But we were well on the road back when she came into office, and I can’t think of a single step she took that has helped further the recovery.

Yes, each of the statement’s four components is misleading. That pyramid of lies stacked in a single sentence could be a metaphor for the essential fakery of her administration. This is a governor and an administration that caused problems, not solved them.

She uttered the phrase at the 2012 Republican National Convention when she was acclaimed as an example of a Republican executive who had worked collaboratively across the partisan divide with a Democratic Legislature.

She echoed it in the State of the State address in January 2013.

She will almost certainly use it or a variation of its theme in the January 2014 State of the State address. Unless challenged effectively, she will repeat it endlessly during the campaign for re-election which will begin in earnest when the Legislature goes home in February. So now, having parsed this sentence, phrase by phrase, it can be laid to rest once and for all, buried in the crypt of zombie talking points we ought to be embarrassed for having once swallowed whole.

Four lies in one sentence. Repeat anything often enough and it begins to sound truthy. Voters should demand the governor identify genuine success if she wants to extend her administration four additional years. Trumpeting made-up successes shouldn’t be rewarded.

9 thoughts on “Four Lies in One Sentence”