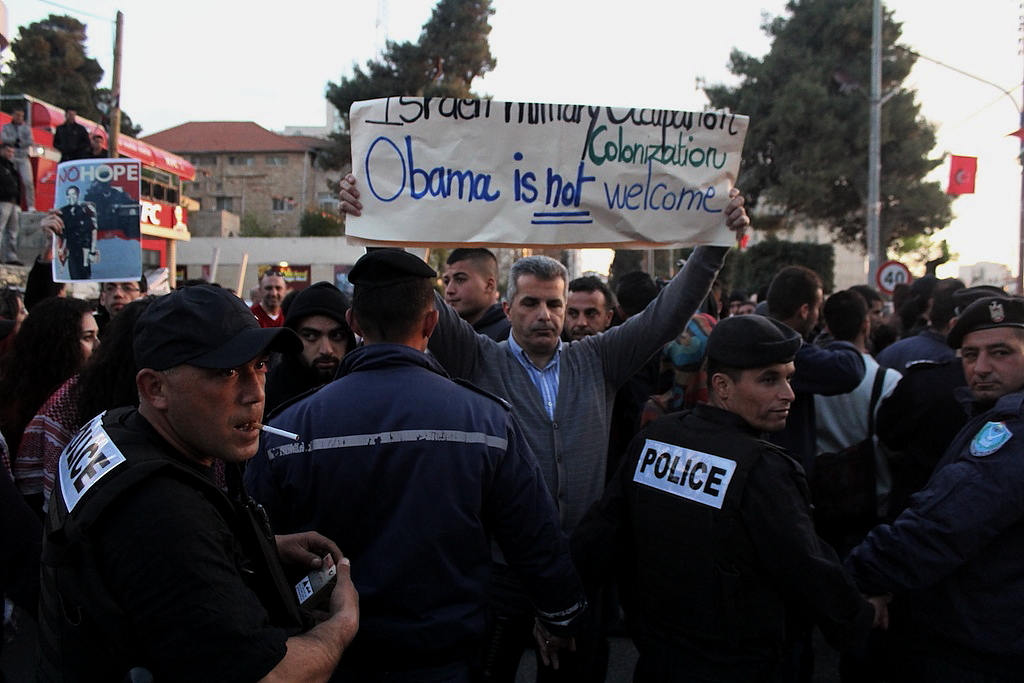 Photo by Andrew Beale—Demonstrator Hazem Kawasmi holds an anti-Obama sign in front of riot police blocking access to al-Muqata’a at a demonstration in Ramallah.

—”Sho bitsawee?!?” he screamed in Arabic as he hit me in the face while attempting to grab my camera. “What are you doing?!?”

I was doing the same thing as dozens of other journalists around me: taking photographs of an anti-Obama demonstration in the de-facto Palestinian capital of Ramallah.

The demonstrations broke out across the West Bank during President Barack Obama’s visit to Israel and Palestine last week, as the Palestinian people justifiably perceived the president had little to offer them.

The United States remains, of course, the major backer of the Israeli military machine that has subjected Palestine to an illegal occupation for the last 45 years.

Two days before Obama’s stop in Ramallah, around 400 demonstrators attempted to march to al-Muqata’a, the seat of the U.S.-backed Palestinian Authority government. They were met by several lines of PA riot police linking arms to stop the demonstrators from progressing up the street. Undercover PA security officers broke ranks with the crowd and joined the uniformed police, pushing protesters and screaming insults at them.

It was at this point I was hit in the face by one of the undercover PA officers, a middle-aged man who bore a striking resemblance to a bald Wormtail from the Harry Potter movies, apparently angry that I was photographing public employees in a public place while they were performing a public duty. Despite this incident and some minor scuffles between protesters and police, all the anti-Obama demonstrations remained remarkably peaceful, with no reported injuries.

After escaping from Wormtail (and making sure to discreetly get a clear picture of his face, so I can recognize and avoid him if he pops up again) I made the rounds of the protest, interviewing anyone who would talk to me. A demonstrator named Hazem Kawasmi carried a hand-written sign that read, in English, “Obama is not welcome.” He told me the protesters objected to U.S. bolstering actions that have robbed Palestinians of their jobs, their homes and their basic freedoms.

The next day, I rode with a convoy carrying tents to the so-called E1 area. This is a mostly empty stretch of land between Palestinian East Jerusalem and the Israeli settlement Ma’ale Adumim. Construction in the E1 area will, among other things, effectively cut off East Jerusalem from the West Bank and preclude the possibility of any future unified Palestinian state with East Jerusalem as its capital.

Construction work in E1 was halted in 2009 thanks to pressure from the U.S., under the auspices of the Bush administration.

But late last year, immediately after the UN voted to recognize Palestinian statehood, the Israeli government announced that it had approved construction on 3,000 housing units in the E1 area. The Obama administration described the announcement as “counterproductive” but then proceeded to blame the Palestinians for Israeli settlement construction. A State Department spokesperson, Victoria Nuland, was quoted in the New York Times as saying the statehood vote at UN headquarters in New York amounted to provocation of the Israelis.

“In the context of the move in New York, you had a risk of action causing reaction,” she said. The Times said her statement suggested that the Palestinian Authority “courted retaliation by going through with the United Nations vote despite repeated threats and pleas from Israel, the United States and other countries.”

Even Bush wouldn’t allow Israel to build in the E1 area, but Obama has not only given an implicit green light, but his administration blames the Palestinians for it.

Since the announcement of the new construction, which is still years away from actually beginning, there have been intermittent protests in the E1 area aimed at establishing a new village known as Bab al-Shams. The first iteration of the village, erected in January, featured 25 tents and was swiftly torn down by Israeli authorities, despite the fact that Israel’s own high court had issued an injunction preventing them from doing so. A subsequent attempt to re-establish the village was blocked by Israeli security forces.

Photo by Andrew Beale—Demonstrators in Ahfad Younis stand in front of a large Palestinian flag holding a sign referring to a pro-Israel lobbying group. In the upper left, the Israeli settlement Ma’ale Adumim can be seen on the hilltop.

But on the day that Obama arrived at Ben-Gurion airport, around 150 of us made our way back to the E1 area. Although the new tent village, known as Ahfad Younis, was much smaller than the original Bab al-Shams, Palestinian protesters erected several tents and, most impressively, a stunningly large Palestinian flag clearly visible from the adjacent settlement of Ma’ale Adumim.

Ahfad Younis was established as an explicitly anti-Obama statement, and the tents were draped with posters carrying anti-Obama slogans in English and Arabic. It’s important to point out that anti-Obama or anti-US-government sentiment is not the same as anti-Americanism, and I was warmly welcomed by everyone I spoke to at Ahfad Younis.

A Bethlehem University student I talked with named Fadi Hilal spoke in the harshest terms about Obama’s actions in Israel and Palestine.