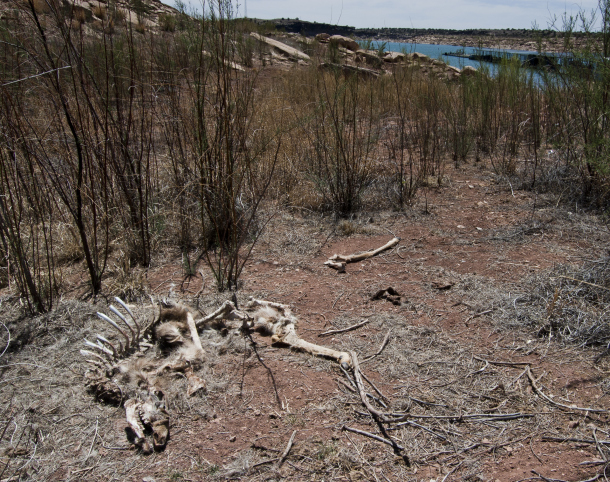 The record-breaking lack of water at Conchas Lake has unnerved residents and hit businesses hard. More than 100 people attended a public meeting with state and local officials last month. Real estate broker Jim McElroy urged people to stay organized: “It’s going to take continued involvement for you folks to keep them with their nose to the grindstone.”

— Ed Wright has lived and worked at Conchas Lake for 21 years. Much of that time, snow runoff and summer monsoons fed the reservoir, which drew tourists from all over the Southwest. As an owner of the Conchas North Dock recreational store, he got used to a steady flow of customers. Anglers, boaters and campers stopped in for groceries, fishing licenses and boat maintenance.

But starting in 2000, Wright noticed annual rainfall tapering off. The lake—in the northeast part of the state about a three-hour drive from Albuquerque—began to shrink, and so did the stream of visitors.

Water at Conchas was at a record low last year, so officials from the U.S. Army Corps of Engineers and New Mexico State Parks cut off all access to the lake’s two boat ramps. The situation only worsened as 2013 rolled around. A federal report released on Thursday, May 2, listed New Mexico’s drought conditions as the most extreme in the country. Boat ramps at Conchas Lake remain off-limits to the public.

Wright — no relation to this story’s author — is a tall man with rough, work-worn hands. He said the region has suffered economically. “Quite simply, people aren’t coming out because they don’t have access to the water.”

Fishing from the shore is still allowed, and the smallmouth bass are biting. But Wright said he’s still seen only a fraction of his usual customer base as the season begins. “Normally this time of year, I’d have 10 or 11 employees. I’d have the restaurant going with waitresses and a cook. I’d have the bar open on weekends. There’d be a bookkeeper and clerk in here in addition to myself, and two people out in the shop.”

Wright removed his baseball cap and brushed back long, silver-white hair. “Now I’m down to myself and one person.”

Selling off the herd

The U.S. Army Corps of Engineers operates and maintains the Conchas Lake Dam, which holds back waters of the Canadian River. Karl Martin, chief of the corps’ Lakes and Assets branch, said his agency is trying to find glimmers of opportunity amid gloomy projections of low flow and water loss to evaporation at the reservoir. One bright spot: The lake is shallow enough that sediment blocking the irrigation gates for years is exposed and set to be cleared away.

Lake levels have been so low that farmers and ranchers have gone without sufficient irrigation for the past five years, Martin said. Clearing away sediment will mean that water can still be delivered during future dry spells — that is, if the lake returns to higher levels. Wright said lack of moisture has converged with other factors into a perfect storm dragging down local business. “Between the drought and the economy and the price of fuel, it’s all contributed to the decline out here,” he said.

Smaller ranching operations that depend on allocations from the lake have been selling their herds off, said Wright. And some farmers in the area haven’t even been able to take out insurance claims on drought-stricken crops. “You can’t plant anything because there’s no water. Unless it germinates and fails, crop insurance is no good.”

It’s been frustrating, Wright said, for community members desperate for the boat ramps to reopen. He referred to the working relationship between State Parks and the Corps of Engineers as a “turf war” and said he wished they would find a way to work together. But Wright conceded that a federal bureaucracy is subject to hard-set guidelines and may not be nimble enough to help struggling small business.

Tasked with enforcing an array of federal laws, including the Clean Water Act, Wright said the Army Corps simply has its hands tied when it comes to taking action to boost the area’s economy. As things stand, he added, the State Parks division is facing the same shortfalls as other enterprises.

“They’re not taking in user fees, and they’re talking about transferring a lot of their park help to other parks that have some activity,” he said. “That’s local payroll that will be moved to another area.” (The state parks office did not respond to requests for comment.)

Martin said the Corps of Engineers is working with the state to find ways to allow safe boat launching, though he said specifics haven’t been hammered out yet. “We’re really focusing our resources and energy to see if there’s a solution to the north ramp that we can both share,” he said.

In the meantime, a headline in the 50-cent Conchas Lake community newsletter called on residents to pray for rain.

One thought on “Bone Dry”