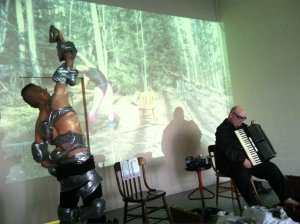 — The first music event at Spirit Abuse seemed like it’d be an understated one. I was one of about a dozen guests who quietly leaned against the walls or sat on the floor of Postcommodity art collective’s new studio and installation space. It was a pawn shop for years. Now the air inside smells faintly sweet, the space swept, tiles scrubbed, dust brushed away.

Instruments had been placed in each corner of the main room. Each musician in turn addressed the audience warmly, thanked the other guys on the bill, then aimed attention at the sparse gear. However subtle in moments, the performances were characterized by churning momentum. The tight, focused energy of each set eclipsed the small scale of the crowd.

Postcommodity member Raven Chacon manipulated his hand-altered soundboard and drummed with one hand at what seemed like an impossible speed—a kind of gnashing, fierce race against the rising rate of his distorted electric percussion. Mark Weaver, whose piece was quieter and meditative, used circular breathing to transform his tuba into a droning echo chamber. John Dieterich (of the band Deerhoof) curled his entire body like a fist around his guitar. His hard, frenetic attack on the strings pinged off the floor’s clay tile while higher tones carried to the ceiling and muted against the wood paneling.

Thollem McDonas‘ work on Rhodes piano made for a surreal soundtrack to the streetscape out the windows behind him. Passengers in an idling lowrider peered through the glass as his fingers gained momentum. When the car outside pulled away, the empty intersections with red to green traffic lights backlit the musician as his fingers veered across the keys, careening from dissonance back toward something close to a melodic resolution, then detaching again.

After each set, it was several long moments before my mind returned to the sensation of my body leaning back in the metal folding chair, and even longer before applause set in. 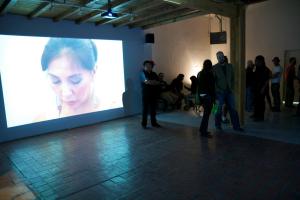 Evolving alongside other local wildlife

A sunny morning a few days later, Postcommodity member Kade Twist, who commutes to the studio from his new home in Santa Fe, unlocked the front door and ushered me in. He pointed to the corner where Weaver played, said that sonically, it was “the sweet spot.” He and Chacon were still testing the sound and the projectors, said Twist, and making tweaks to the electrical setup of the space.

The vision for Spirit Abuse, he told me, is to construct it a two-pronged identity. The small room in the back will serve as Postcommodity’s dedicated workspace. He and Chacon have already begun preparing for regular visits from the other collective members, Cristóbal Martínez and filmmaker Nathan Young. The open front room will spotlight the work of others—with an emphasis on artists from the Southwest, especially Arizona and New Mexico.

“It’d be great if we could build up a reputation as a video installation space and a performance space,” said Twist. While it’ll make marketing a challenge, Twist said he anticipates using the space in an improvisational way, seizing on interesting showcases and collaborations as they present themselves.

“We’re still trying to figure out where we fit in the ecology of spaces, so part of it is not stepping on anyone’s toes,” he said. The gradual emergence of independent, experimental art sites around in the Downtown area over the past several years, he said, “opens up a potential for critical mass.”

A longtime contributor to other DIY, artist-run exhibition spaces around town, Chacon said he hopes Spirit Abuse can act as a geographic link between places like the Tan and Small Engine in Barelas, and Kosmos/5G and SCA to the north. It also merges well with its nearest East/West cross-street of Mountain Round, lined with craft and design studios as it winds toward the Albuquerque Museum. The intention, said Chacon, is that Spirit Abuse will augment the neighborhood for a long time.

By taking a curatorial approach that stems from their combined artistic interests, Postcommodity’s members will be able to expand their theoretical and aesthetic conversation beyond the collective. Installations Spirit Abuse ends up hosting, said Chacon, “could be about where we want to go, or we admire what they’re doing. They might be colleagues or collaborators but completely have their own process.” 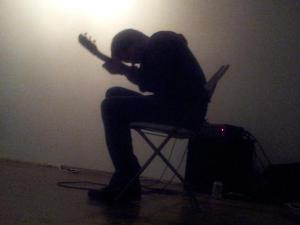 Twist said there are plans to collaborate with the Museum of Contemporary Native Arts on a regular basis for satellite programming. “We have an indigenous perspective,” he added, “but it’s not an indigenous space strictly.”

For instance, said Twist, he’s interested in using the space with scholars, curators and other creative minds to open up conversations about globalization, neoliberalism and cultural philosophy. As artists, “our research is focused on exploring metaphor,” he said. “And metaphor is about creating linkages but not a truth. It’s about facilitating a discussion—and using metaphor that discussion can collapse around or be reinvigorated by.” As he spoke, I realized the persuasion of metaphor had been on full display during that first noise show.

It had been a while since I’d heard purely instrumental, experimental music live. I forgot that like Classical music or jazz, the slippery questions it poses can evoke visceral reactions.

That night, my eyes had filled unexpectedly with tears as Chacon played, breathing ragged tones into his machines through a white tube. An image had worked into my head, of a night at my mother’s sickbed. One of her a medical machines had malfunctioned, and I had to work it by hand to pump milky fluid out of a bag, through a tube and into her body in steady increments. The tears drew back as Chacon’s noise grew in volume, amplifying off the vaulted ceiling until it seemed to be emanating not from his instruments but from the roof or somewhere further outside the building’s walls.

When I stepped outside after the performances, the neighborhood’s silence had grown cavernous. My ears were ringing, but I could hear the streetlight down the block next to Donna Bail Bond—its yellow pool of light buzzing beside a mural that depicts a jumpsuited prisoner with arms outstretched, newly released.