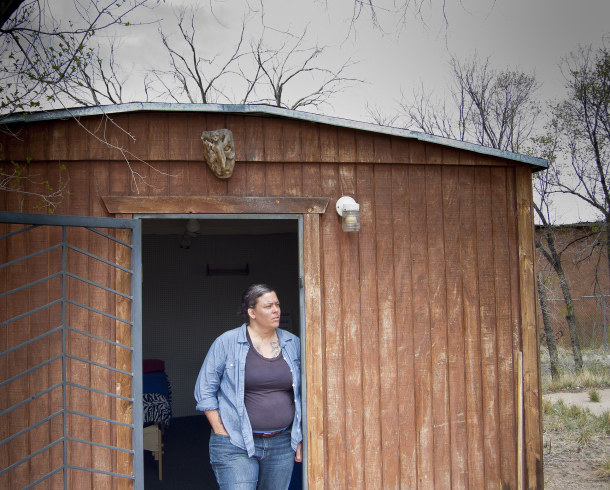 Perez in the doorway of the treatment studio she set up behind her house in Santa Fe. — Photo by Margaret Wright

— Maria Perez has worked as a healer for most of her adult life. As a doctor of Chinese medicine with a “public health, social justice heart,” she offered low-cost treatments for years.

Which is why, she says, her comparatively small income hasn’t been able to bear the costs of health insurance. Uninsured, she saw the dentist once in the last 20 years, she says, and a doctor maybe twice. “I’m a healthy person, and I’m a health practitioner, so I can keep up with my own health pretty good,” she says. “But thank God nothing bad has happened.”

It’s a common story in New Mexico: In 2010 it was estimated that 20 percent of the state’s population—about 400,000 people—was uninsured. When major provisions of the Affordable Care Act take effect in January, about 170,000 of those folks will be eligible for full coverage with no premiums or cost sharing, according to the New Mexico Center on Law and Poverty.

The rest will sign up using the health insurance exchange and, depending on income, will pay part of the premium while the federal government covers the remainder. Enrollment begins in October.

Perez, like thousands of state residents, will be able to afford going to see a doctor of Western medicine for the first time in decades. “I haven’t been able to get all my yearly checkups and wellness exams, stuff like that,” she says. “All of this will be amazing for me.” You can often skate by without regular checkups in your 20s and 30s, she says. But her 40th birthday is approaching, she says, and “at some point, you need health insurance.”

Perez grew up in Ecuador before coming to New Mexico to study Chinese medicine. She moved to Portand, Ore., where she practiced within a community acupuncture model used around the world. People come in to be treated as part of a group, not in individual sessions in a spa setting. This allows visits to cost as little as $20. “I’ve always chosen to work with underserved populations,” Perez says.

These days, she is an instructor at the Southwest Acupuncture College in Santa Fe. Though she’s spent her life dispensing herbs and acupuncture, she has no beef with Western medicine. She says it’s particularly good at emergency care.

Over the years, plenty of uninsured people have come to Perez for help dealing with symptoms that would be much better treated somewhere else. People suffering from extreme tooth pain—related to an abscess or infection—would show up at her clinic. She would use acupuncture to control the pain and fight inflammation, but, she adds, that can be a life-and-death situation and isn’t really within her scope of practice.

When the economy collapsed in 2008, and people around the country lost their jobs and insurance plans, alternative health care picked up the slack, she says. “I saw a huge increase.” Newly out-of-work corporate employees began visiting her low-cost clinic for treatment. “The number people who are served by alternative modalities skyrocketed in the last 10 years or so.”

An Ounce of Prevention

Home to centers, schools and organizations, the state has a long tradition alternative care. Natural medicine is often practiced at home, too, when people can’t afford to rack up hefty bills after being struck by an illness. 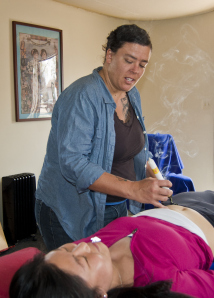 Access, not distrust, Perez says, is really the issue. That’s why she’s been traveling the state as part of consumer advocacy nonprofit Health Action New Mexico, trying to inform people about Medicaid and its coming expansion.

It’s unclear how alternative medicine will be handled under the Affordable Care Act, Perez says. It’s mentioned in law several times, but no one really knows yet what will be covered and what won’t. That leaves chiropractors, acupuncturists, massage therapists and their patients holding their breath.

The Centers for Disease Control and Prevention estimates Americans spent $33.9 billion out-of-pocket on natural health care in 2007. About 38 percent of adults and 12 percent of children use alternative medicine. “Over the last decade, the U.S. public has shown a steady and substantial use of complementary and alternative medicine” according to the 2009 National Health Statistics Report.

Perez acknowledges that there are kinks in the Affordable Care Act that still need to be hammered out, including its next phase of implementation on Jan. 1. Will there be enough physicians to handle an influx of new patients? By the end of the decade, the country could see a shortage of 90,000 primary care doctors, according the the Association of American medical Colleges.

Though the law tries to incorporate alternative modalities more, it hasn’t yet figured out how to make use of those practitioners, she says. “It’s not like, OK, this is what we have. How do we make everything work as efficiently and as connectedly as possible?”

In the Affordable Care Act’s favor, she says, is the fact that it’s trying to shift the American health care paradigm to emphasize prevention. Reform should offer access to both options for the best results, she adds. “An integrative approach would be the best option.”

Eastern medicine, she says, is great at catching things early on. Plus, “its been proven really effective for treating things like post-traumatic stress disorder, insomnia, stress, anxiety—all of these things that we rely very heavily on pharmaceuticals, and expensive and dubiously effective treatments.”

If you have a headache, she says, you’re not going to go to the foot doctor. Alternative medicine is about maintaining health, “so people don’t need as many services down the road.”

One thought on “Alternative Medicine in the Changing Health Care Paradigm”