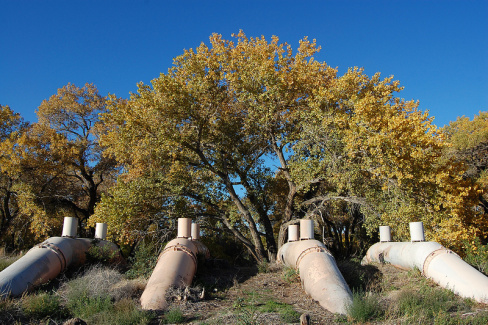 — There’s little disagreement over the essential quality of Albuquerque’s Rio Grande Bosque: The meandering ribbon of riparian forest is a public treasure. But on the eve of city elections, controversy has erupted over how to best use the riverside’s fragile habitat.

Berry’s vision for the Bosque received $2.9 million in taxpayer funds granted by the City Council. The city contracted with architecture firm Dekker/Perich/Sabatini in July to finish the first set of technical drawings by the end of this month.

Rio Grande Vision planners called a public meeting to order on Sept. 4. It was a standing room-only crowd of hundreds, and local media was on hand to register the majority of attendees voicing opposition to the city’s ideas. Democratic candidate Pete Dinelli and Independent Paul Heh, contenders for the mayor’s office, have both since come out against the Rio Grande Vision.

The city then canceled a public meeting scheduled for Sept. 18. According to a city press release, more public meetings will be set after staffers are able “to analyze the comments and to study and incorporate some of the comments” from the previous meeting.

Andrea Serrano with the nonprofit Organizers in the Land of Enchantment (OLÉ) is among those mobilizing to shift the city’s Bosque planning. On Sept. 19, following a rally at the Albuquerque Museum co-organized by OLÉ, the Sierra Club, Hawks Aloft and other community groups, Serrano helped deliver about 400 petition signatures and hand-penned letters to the Mayor’s Office.

Most Burqueños consider the Bosque a sacred space, says Serrano, and they want to help people engage with the wilderness in a sensitive way. “People want conservation, restoration, keeping the Bosque wild and improving the facilities we already have.”

Conservation advocates and scientists were left out of initial project planning, says Serrano. “From the start, this project has been development-minded and business-minded.”

Linda Rumpf, city project manager for the Rio Grande Vision, referred a request for interview to Berry’s office. But the mayor’s spokesperson Dayna Gardner refused to comment, pointing to info on city websites. As of press time, the lead project planner at Dekker/Perich/Sabatini had not responded to requests for comment.

According to documents posted on riograndevision.com, the project “was created with input from city and federal agencies, technical and community steering committee members and the general public.” The website for ABQ: The Plan says an environmental consulting firm was hired “to monitor conditions in the Bosque before, during and after construction and also to provide guidance during planning and design.”

The Rio Grande Vision’s first phase calls for new construction inside and outside the riverside forest at Central and 1-40, including improved educational signage, riverbank restoration and updated access infrastructure. Official documents strike a conciliatory note: “There are no structures proposed inside the levees except for a boardwalk in an area that ﬂoods periodically, four pedestrian bridges associated with trails and several observation areas along the river in select areas.”

Architect Anthony Anella is a board member for the Aldo Leopold Foundation, which advocates for wilderness conservation. He says activists are concerned that many of the proposed changes—however well-intentioned—will disrupt the Bosque’s ecosystem, which has already been endangered by centuries of human activity. For instance, the phase one plan proposes to limit use of informal dirt paths and widen a through-trail before paving it with crusher-fine gravel. Anella says this approach “is totally inappropriate” in the Bosque, where the migratory and nesting habitats of stressed animal populations are easily disrupted.

Anella says the mayor and his planning team are right about one thing: “Providing access to the Bosque is one of the best ways to protect it. What better way than to bring young people in?”

The city would be well-served by investing in educational programs that encourage visitors to meaningfully connect to the river ecosystem, says Anella. “What other city in America has a 22-mile-long state park running through the length of the city? It is a tremendous educational resource.”